S.J. Hermann is a writer of paranormal, science fiction, horror, and romance novels. His books have moral basis hidden within them, and he brings some of his experiences into his characters. Hermann is an anti-bullying advocate and his struggles with self-harm can be read on his website.

Hermann currently resides in the Northwest suburbs of Chicago, Illinois, where after a break, he hopes to return to college to earn a certificate in graphic or web design.  When he is not thinking of stories to write, he is an award winning artist.

Hermann is an avid rollercoaster fan who has ridden over forty different coasters throughout his life. Though he is terrified of heights, there is not a ride he won’t conquer. If there is a hockey game on television, you can bet that he will be watching, especially his favorite team the Chicago Blackhawks.

He is an avid Walking Dead fan and will read or watch anything about zombies. Max Brooks and Stephen King are his authors of choice. He is a strong supporter of indies. 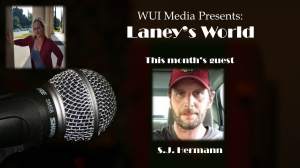